Please consider helping make Can’t Win 4 Losing’s second season possible by becoming a patron at this link or by clicking the orange “Become a Patron” button above. Patreon is a platform that makes it easy to support artists and creators financially. Rewards start at $3 a month, but you can pledge as little as a dollar a month. Thank you. 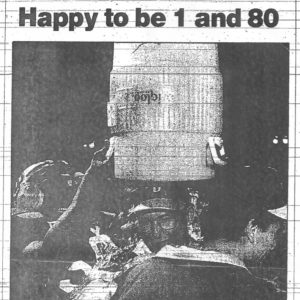 This headline and photo were the centerpiece of the Houston Chronicle’s front page on October 24, 1993, the day after Jefferson Davis High beat Wheatley 19-18 to end an 80-game losing streak that had begun in 1985. Coach Chuck Arnold is getting the Gatorade treatment from his players.

Arnold had taken over as a rookie head coach in 1991. His best player that year was Michael Porter, a running back who also played whatever position his team needed. Porter went on to a college career at Prairie View A&M — which was also in the middle of an 80-game losing streak. When Porter’s playing career ended without his ever having played on a winning team, Arnold hired him as an assistant. When Arnold retired two decades later, Porter became the head coach at Davis, which has since been renamed Northside High.

Porter is the focus of this week’s episode of Can’t Win 4 Losing. This bonus episode features longer interviews with Porter, Arnold and Gerald Garcia, a longtime coach at Northside who coached Porter back in ’91 and now works for him as an assistant.